Today I have another tidbit from the 1968 Attaché to the US, this time about armor protection for light vehicles. The original documents (in Swedish) are available here.

Materials and methods for ballistic protection

The following details were handed over by Mr. Pagano and Mr. Phelps at ATAC.

In recent years a lot of research has been done on improving the level of armor protection, primarily for lighter combat vehicles. The goal is to develop a more effective and lighter armor than what is currently in use. In the following table (dated 10.10.1967) shows the perceptual weight reduction to achieve the same level of protection as steel with a number of other armor types. The projectile which has been used as a reference is the soviet 14,5 mm AP1BS41 and the distance has been set at 200 m. 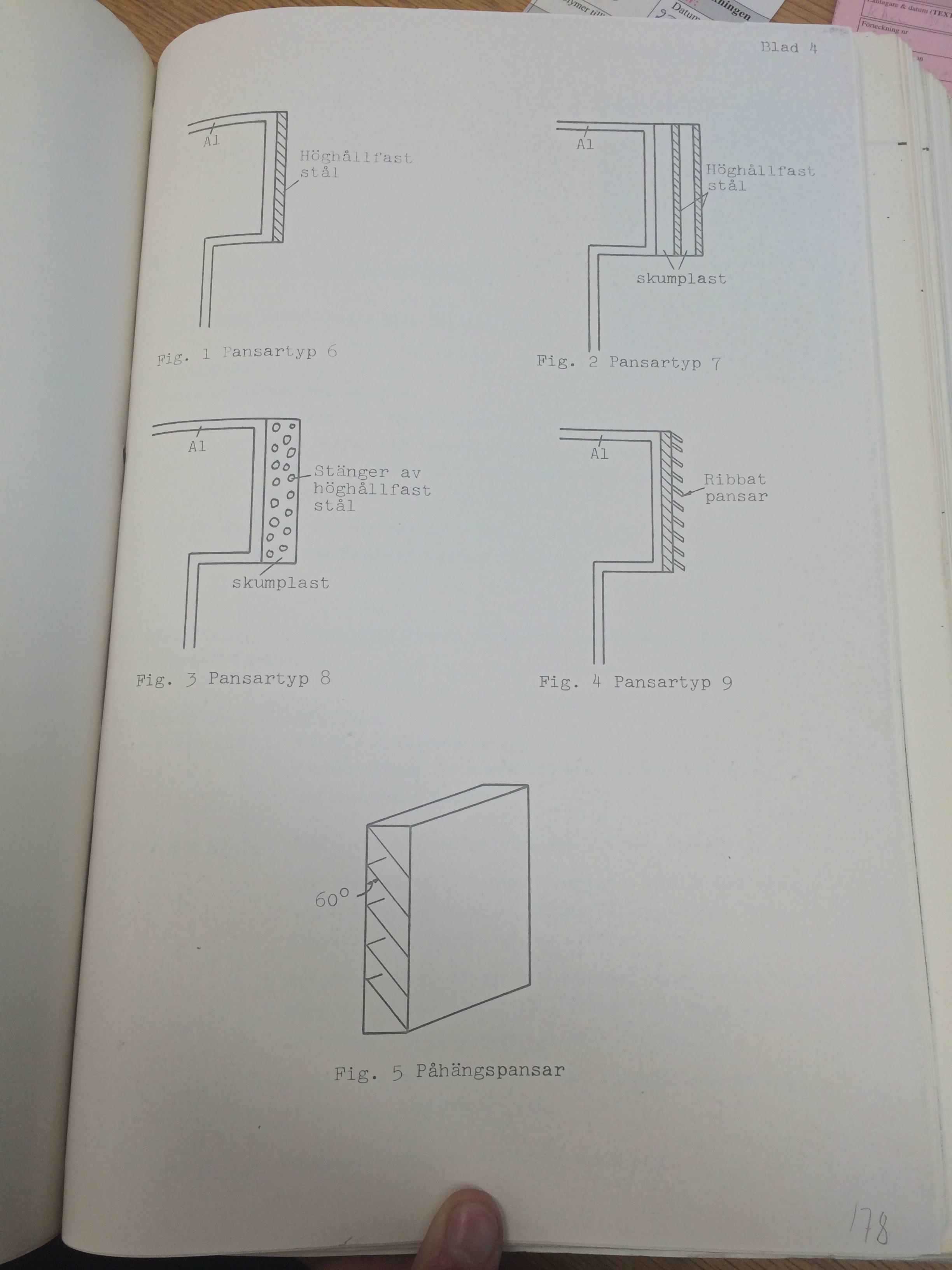 The above mentioned armor types are expected to protect against weapons of up to 40 mm caliber.

For lighter vehicles (type M113) a type of external applique armor was considered. This armor would consist of a rectangular metal box configured as in Fig 5 consisting of a lightweight metal shell. In this metal box spaced armor plates could be added at a 60º angle. These would be made out of one of the following alternatives:

Other alternatives may also be considered. The armor box would be designed in such a way that they could easily be applied in the field. The advantage offered by this type of armor would be:

The ceramic applique armor would consist of 6×6 or 8×8 inch aluminum plates with a aluminum oxide coating. The disadvantage of these armor plates is that the ceramic coating is very brittle and tends to break apart when hit. Because of this a fabric covering was introduced to hold the ceramic together. Unfortunately this made it easier for incoming projectiles to dig into the armor.

A type of ribbed armor was also considered. It could consist out of sprayed, cast or forged alloys. Thus allowing the use of a high hardness steel (or titanium) while avoiding the issues of joining these kinds of plates together. The plates would be fastened by the use of rails or screws. The advantage offered by this type of armor would be:

When it comes to the question of protection against shaped charges it would be a great advantage if a shaped charge could be detected and destroyed before reaching the vehicle. Sensors and explosive charges would be placed along the edges of the vehicle. This type of armor was agreed to be theoretically and technically possible, however a practical solution is very far away.

For more heavily amored vehicles Steel and Aluminum combinations have not shown especially promising results. Cast armor is preferred due to existing production resources which makes this more economical. From a protection point of view the cast armor is considered to be 10-20 % worse than rolled armor, this means the thickness must be increased to reach an equivalent level of protection. Cast armor also requires a high level of quality control, which means that an automatic control system should be used.

High hardness steel causes some issues at lower temperatures. It is however used on for example the wheeled Commander vehicle. The armor thickness should be around 1/4 inch. Currently at production scale the steel is welded. There should have been some problems with welding in the beginning but these have been overcome. MIG welders with feritic electrodes are being used. This is to be changed to another method (ozonic?).

During the visit to Aberdeen a M113 was demonstrated with  spaced armor. In this case the outer plate consisted of 15-20 mm of aluminum. The distance to the inner plate was 100 mm.